Seat at the Table
All Niagara Region projects

Despite being just over half of the Niagara population, women are underrepresented in local government, especially in senior leadership. On Regional Council, 25 per cent of councillors are women and no apparent visible minorities serve on Niagara Region or local municipal councils.

Niagara Region's Seat at the Table program aims to address barriers that women face running for municipal office and to improve the environment once elected. The goal is to increase the number of women, particularly underrepresented women, elected for municipal government in Niagara by promoting understanding, awareness and confidence through education, mentorship and support to those interested in running for election.

The program consists of four workshops that will help women and underrepresented groups feel informed and educated when making the decision to run for local government. Those elected will then be invited to participate in three sessions in 2023.

Seat at the Table will provide participants with the knowledge and skills to run a successful campaign, and if elected, support throughout their term.

This initiative is funded by Women and Gender Equality Canada in partnership with the Federation of Canadian Municipalities and:

June 1, 2022 - completed
Session 3: Working with other levels of government, policy and planning 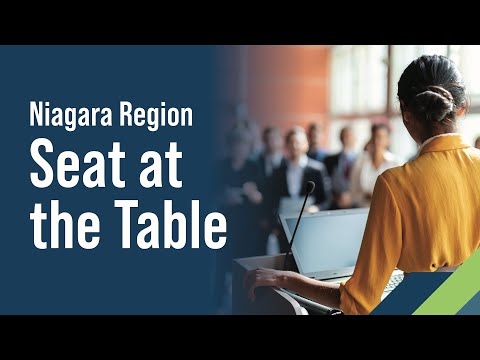 Women who intend to run for election will have mentorship opportunities as part of Seat at the Table. Once candidacies are announced, mentorship will pause until the end of the election to prevent partisanship or bias.