COVID-19 - Get vaccinated and stay up to date, and find public health advice for residents. 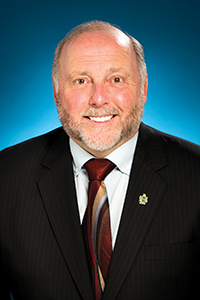 He retired in 2014 as president but remains chairman of the board for Gale Gas Bars Limited, which includes Gales Fuels and Bob's Fast and Fresh Convenience.

Born in St. Catharines, raised in Niagara Falls, living in Niagara-on-the-Lake and doing business throughout Niagara has made him a well-rounded individual with a plethora of knowledge regarding the trials and tribulations of being a citizen of Niagara. He is married to Vera with three children, Jessica, Bobby and Angela.

In the 1970s, Councillor Gale was a NRPS officer and was the 1978 Police Officer of the Year, including being awarded the Medal of Merit. Since 1980 he has owned and operated Gale's Gas Bars Limited. His daughter Jessica has now taken over control of the company.

Over the years he has been a baseball and hockey coach; a Big Brother and made countless commitments to help the less fortunate. He has spearheaded the Gale family's involvement in many volunteer and philanthropic endeavours to benefit the community, including the:

Councillor Gale has also donated time to various organizations, including:

He has been the recipient of the prestigious Canadian Red Cross Power of Humanity Award 2006 and the Paul Harris Award for his Rotarian efforts, in addition to many others.

Through his world-wide travels Councillor Gale has also helped the less fortunate in other areas of the world - most notably, with a friend, financing a school and reservoir being built in southern Kenya for a Masaii tribe.

He is known for fighting for fairness as a past Niagara Parks Commissioner and credited with saving provincial taxpayers up to $300 million when the lease for the Maid of the Mist was fairly tendered out. As a result, he was asked to be an advisory on a National watchdog group over government waste.

Councillor Gale is a member of the St. Catharines Golf and Country Club and plays hockey weekly at the Gale Centre. He is keen on area history and enjoys attending concerts in Niagara Falls.